× Coronavirus (COVID-19) Our timings & Shipping may affect due to COVID-19. Remember to wash your hands and stay in your homes to keep yourself safe.
Skip to navigation Skip to content 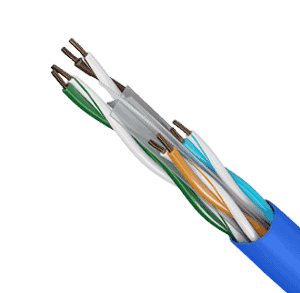 A plenum cable can simply be referred to an Ethernet networking electrical cable that is rated to be run in plenum spaces of buildings. Generally, this sort of space lies in between floors of a given building.  Before, any knowledge of this cable, it is contextual to know as to what is a plenum space and why does it require a particular sort of cable to be installed in them.

A plenum space homes air circulations for different ventilation, cooling, and heating systems. Due to the constant air circulations, there is high oxygen content present in such a space making it highly sensitive to fire hazards. Space can readily catch fire, and that is where the plenum cables come into play. the cable is a special sort of cable that is jacketed and coated with fire-retardant materials. The fire ratings on such a cable, are thoroughly tested. The jacket is designed usually with Teflon so that it does not burn off with smoke and injurious fumes in an event of a fire. Therefore, this cable is recommended for a plenum space.

Typically, one can find these cables in different categories. That is because, when you say ‘plenum cable’ that means a cable that is jacketed with certain fire-retardant materials and coatings and is rated to be installed in plenum space. As of market practice these days, these cables are usually found in the form of category 5 enhanced (Cat5e), category 6 (Cat6) and category 6 augmented (Cat6a). These cables are usually sold in bulks of 1000ft.

A Cat6a cable is the most expensive combination out of the aforesaid, followed by the Cat6 cable, and then the Cat5e cable. The sequence is so because of the high specifications and prominent features of a Cat6a cable, followed by that of Cat6 cable and Cat5e cable. If you have tight budget and you want an Ethernet cable with decent specifications, you should go for Cat5e Plenum. These cables are often sold with 23AWG to 26 American wire gauge pure copper conductors or copper-clad aluminum conductors. These cables are incorporated with twisted pair design which is a market standard, and it is quite useful when it comes to cross-talks and other electromagnetic interference.

What is Cat6 Plenum Cable?

A Category 6 plenum cable is a communications multipurpose cable, plenum i.e. it is a CMP rated cable that is tested for Category 6 specifications. It is a cable that has a special jacket that caters to strict fire ratings. Generally, there are two sorts of cables that are used to repel flame progression fire-sensitive applications. In accordance with the relevant standards in the United States, such cables are Underwriters Laboratories (UL) cables made of polyvinyl chloride, and according to European standards, such cables are Low Smoke Zero Halogen cables (LSZH cables).

The cat6 plenum cable is a UL, ETL listed cable which essentially means that it complies with UL190 safety fire standard. Therefore, this particular sort of cable is designed in such a way, that it restricts flame progression to no more than five feet, and unlike when regular plastic burns, the cat6 cable does not burn off with fumes and smoke. In addition to the features of a plenum jacket, this cable carries specifications relevant to a cat6 cable.

Where We Can Use Cat6 Cable?

A category 6 cable can be used for 10BASE-T (Ethernet), 100BASE-TX (Fast Ethernet) 1000BASE-T (Gigabit Ethernet GbE) and 10BASE-T (10-Gigabit Ethernet). However, when it comes to applications that are specific to a cable with a plenum-rated jacket, you first need to determine whether a structure or a building uses plenum air return.  To determine that, you need to look at several things, for the purpose, an expert can visit your space and let you know. Nonetheless, it is recommended that when a building is constructed, additional space for plenum cables, is reserved. If you want the ultimate networking experience then Cat6a Plenum is suitable cable for you.  Apart from that, these cables are recommended to be used in computer rooms or IT centers, for in such spaces, the design is usually a raised flooring system to accommodate the servers. The raised flooring system means that cooling can take place from floor to floor in between several servers, routers, and switches stationed. Air circulates for the purpose of cooling, and that is why plenum cables are recommended.